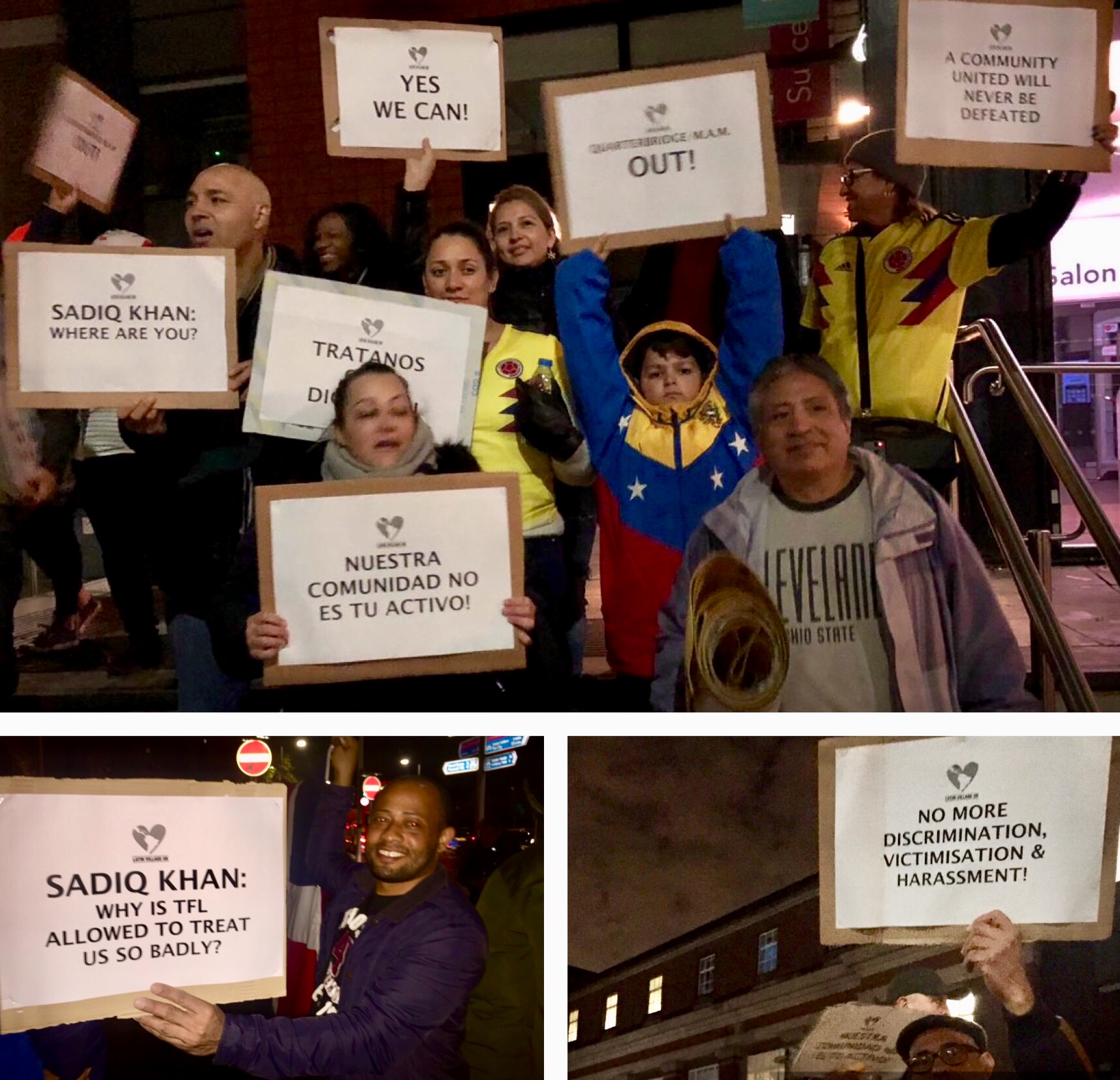 On 15 June, with the easing of coronavirus restrictions, indoor markets were given permission to reopen across the UK. Latin Village|Pueblito Paisa, however, remains closed.

The reasons for this are not due to COVID-19, at least not directly, but to a number of long-standing and avoidable issues in the management and maintenance of the market and Ward’s Corner building. Those that rely on Latin Village are left paying the price for this – Black and Minority Ethnic (BAME) businesses are left without income, BAME employees without salary, and the BAME community without a key resource for mutual aid and informal support, until a solution can be agreed.

Here we outline some of the key issues in more detail:

Whilst the Ward’s Corner building is basically structurally sound, the physical condition of the premises has been steadily deteriorating during recent years due to lack of investment over a period of years.

The issue of Health & Safety regarding the building condition was first raised to Transport for London (TfL) by traders via the Seven Sisters Market Steering Group in 2016, and highlighted again in a solicitor’s letter. Since that time, TfL have carried out three investigations into the market operator. A decision to conduct an independent Health & Safety audit arose from the most recent investigation.

The audit took place earlier this year, funded by TfL – it is the first such audit in 35 years, and the only one to have happened since the concerns were initially raised in 2016.

The findings of this audit were shared with traders earlier this year, and discussed in a meeting on 12 March, chaired by Deputy Mayor of London, Joanne McCartney. Although the report highlighted a number of issues, at the time of that meeting, TfL said they wanted to keep the market open and would work to find a solution. Potential amendments to remediate the issues were discussed, to be reviewed on a unit by unit basis. It was acknowledged that remedial works would have an impact on traders’ ability to run their businesses, and that disruption should be kept to a minimum.

In a more recent letter to traders, on 2 June, the outlook appeared to have changed drastically. Traders were informed that the market would instead remain closed until works are completed. The letter acknowledged that this problem has arisen “as a result of years of neglect”, but does not provide much clarity on the timeline for reopening. Despite this unclear timeline, traders were encouraged to hand over the keys to their units to help facilitate the work.

The unforeseen COVID-19 lockdown period provided a two-month window of opportunity for these works taking place in good time, with minimal additional disruption.

Traders and Save Latin Village agree that the physical safety of the site is paramount – as evidenced by the fact that traders initially raised this to TfL themselves. However, we are also concerned that this situation may be following a common pattern in regeneration projects, where a period of managed decline precedes an acceleration of progress on the redevelopment scheme and the removal of existing occupants.

Of course, as we are not in a position to conduct our own Health & Safety audit, we must trust that the findings of the independent contractor hired by TfL are correct. We also cannot know what may lie behind TfL’s failure to remedy these issues sooner. However, we do observe that the order of events at Pueblito Paisa closely fits the textbook for managed decline:

One concern highlighted in the Health & Safety audit relates to the mezzanine floors used by many of the units in Pueblito Paisa. This deserves particular focus as it could have a material impact on the offer made to traders in the temporary market at Apex House, and potentially in perpetuity.

The mezzanine floors have been a feature of the market for close to twenty years. They were originally created to recreate the traditional village architecture with balconies typical to many Latin American countries, particularly Colombia.

They also provide valuable additional floor space. In many cases, they are crucial to the continued functioning of the businesses.

For example, one business, a butcher, uses his mezzanine as a cold room for meat storage. If he is prevented from using the mezzanine floor of his unit, then he will not be able to function as a butcher.

In another unit, the mezzanine houses a self-contained beauty business – if the space is not allowed to be used, this business will have no premises to operate from.

Notably, the relocation offer to traders at Apex House only guarantees to cover traders’ ground floor footprint, not the mezzanines.

Again, we cannot rule out that this is a coincidence, but if mezzanine floors are decommissioned via the Health & Safety audit, it weakens traders’ leverage in negotiating an equitable deal on floorspace at Apex House. This would be financially beneficial for Grainger, but a significant hindrance to many Latin Village businesses. For some, it would be an existential threat.

Further complicating this situation, on 11 May, current market operator MAM reported that they have appointed an insolvency practitioner.

They communicated to the traders that if a deal is not possible, the Latin Village may shut permanently, threatening the 40 BAME businesses trading there, and the livelihood of around 120 workers.

On 5 June, MAM/Quarterbridge issued traders a rent invoice despite the fact that:

Traders and Save Latin Village have devoted significant effort in highlighting these and other ongoing conduct concerns to TfL. During that time, and over a period of several years, TfL have chosen not to replace MAM as market operator, even though these actions would give them the right to terminate the contract. In short, they have chosen to tolerate the behaviour and thus allow it to continue.

The repercussions of this can also be felt in the current avoidable closure of the market.

As market operators since 2015, MAM had responsibility for building maintenance and Health & Safety during that time. As such, they have presided over the continued deterioration of the building, that is the underlying cause of the traders now being unable to reopen along with other UK Indoor Markets. And this has been facilitated by TfL and their high threshold of tolerance for discrimination, unequal, unprofessional and unlawful treatment of Latin Village traders.

TfL is obliged to find a new market operator – at the time of writing, this decision is still in progress.

Plans for reopening the market are currently unclear.

Guidance given to traders has varied widely with potential dates for reopening spanning a period of several months. During this time, traders will be without income – they need a clear roadmap to allow them, and their employees and families, to plan financially for the disruption. As things stand, they currently do not have this clarity.

Traders have been engaged in discussion with TfL and Grainger plc, via the Seven Sisters Market Tenants Association with support from Save Latin Village. In these meetings, TfL have echoed the sentiments expressed on 12 March, that they support the reopening of the market and will seek to achieve this as soon as possible.

What they said in March has been starkly at odds with the experiences of traders in the months since, who still find their businesses without power, income or a clear roadmap to reopening.

We take TfL’s assurances in good faith, but we will hold them to account. The circumstances of the COVID-19 have caused significant disruption to all parties, which could not have been foreseen. As the pandemic becomes more predictable and manageable, and the country returns to a semblance of normality, we urge TfL to ensure that their actions now match up to their words.