Coronavirus Bites, Amid Eviction Notices and Power Cuts: A Challenging Start to 2020 for Latin Village 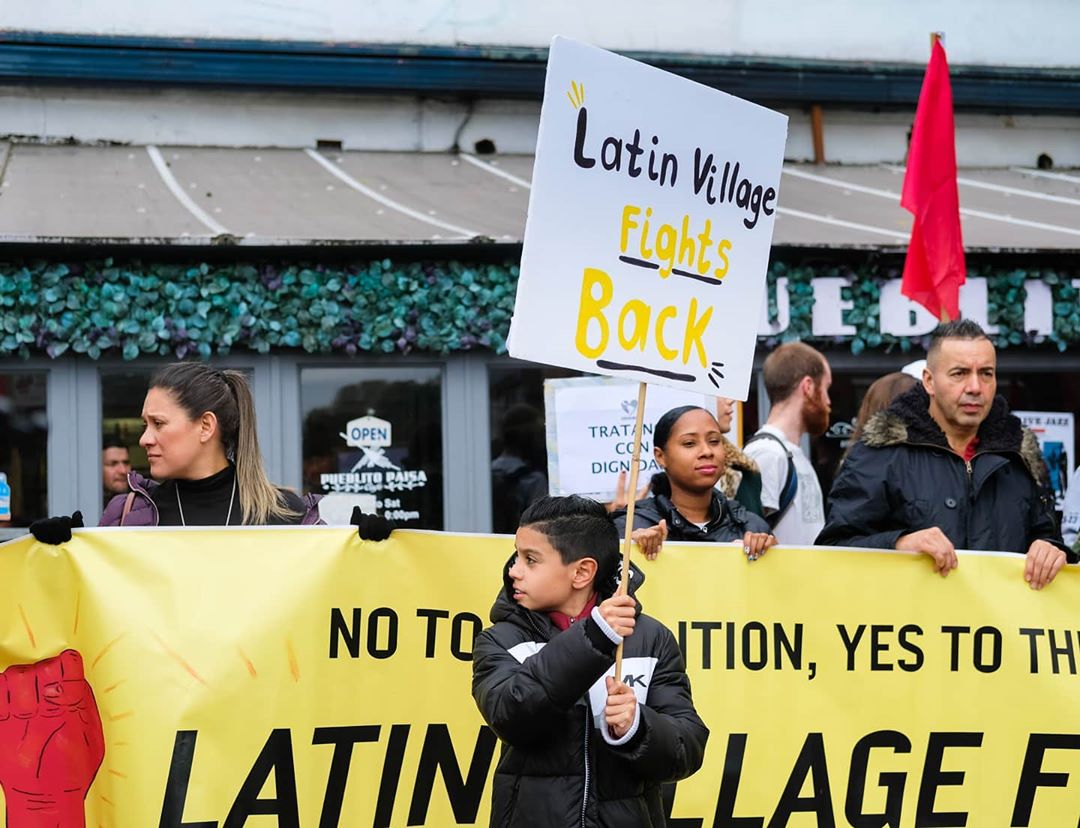 During the past fortnight, the Latin Village has faced unprecedented challenges. With the escalation of the coronavirus crisis, much of the world now finds itself plunged into disorder, and Latin Village is no exception.

Covid-19 disproportionately impacts the most vulnerable in our society. All of the traders at the Latin Village are from a minority ethnic background, self-employed and mostly women. Against this backdrop, and with many of the usual support channels preoccupied with the viral crisis, traders are facing further obstacles arising from the actions of Quarterbridge/MAM.

In early March, Transport for London (the site landowners) held a meeting with traders, chaired by Deputy Mayor of London, Joanne McCartney AM. In this meeting, TfL pledged to do everything within their power to keep the market in operation.

Days later, the electricity was cut off to all traders because of a bill left unpaid by TfL’s partner, Quarterbridge/MAM. It later emerged that TfL were aware of the issue, although did not raise it during their meeting with traders.

And it was quite the bill: according to traders, Quarterbridge had accumulated over £160,000 in utilities arrears. Given the choice to pay half of what they owed, in order to reinstate electricity at the market, Quarterbridge apparently declined. Notably, this has happened within the context of traders being obliged to pay suspiciously high utilities rates to Quarterbridge, described by David Lammy MP as “very serious allegations of overcharging of traders for electricity and other utilities by the market operator—allegations that might amount to fraud and which ought to require police involvement”.

As BBC Inside Out aired a feature documentary about the Latin Village, traders were literally in the dark, dealing with spoiled food and loss of income during these most trying of times.

That Quarterbridge/MAM have been allowed to continue this longstanding and well-documented mistreatment of traders is a disgrace to those who have promised to represent the interests of this vulnerable community. We continue to seek the removal of Quarterbridge/MAM as market manager and leaseholder.

Recent months have been no less busy for the campaign.

There have been humbling displays of solidarity and grass-roots activism, and high-profile coverage of the campaign in the press.

In January, traders and campaigners came out in force at the Sadiq Khan’s Mayor’s Question Time. Days later, we protested at the Tottenham Labour meeting. And then assembled again in Newcastle, to protest outside Grainger plc’s Annual General Meeting.

MP David Lammy highlighted our campaign in the House of Commons. We were featured in a wistful piece by Ed Morales in the Washington Post, and in a blistering call-to-arms by the Guardian’s Aditya Chakrabortty. The BBC’s Inside Out programme produced a documentary detailing the plight of the Latin Village and our sister community in Elephant & Castle.

Unfortunately, this activity was necessary, sparked by escalating tensions with Quarterbridge/MAM, and troubling developments with Haringey Council.

Over the Christmas and New Year holidays, a peak period for trade and cultural life, the market was suspended by Quarterbridge, for a necessary but ill-timed Health & Safety inspection. In January, bailiffs appeared at the site to issue an eviction notice to several traders, only stopped by the dozens of supporters who arrived on site to show solidarity. Most recently, businesses were left without electricity after Quarterbridge apparently failed to pay their bill. If this isn’t intentional, then it is a stunning display of either negligence or incompetence.

We are also sad to report that, following an evaluation of its own scrutiny review, Haringey Council voted to reject several key recommendations from the report. This is a particularly troubling development, given the council’s pivotal role in protecting the traders’ interests.

These key events are worth outlining in more detail:

Haringey Council votes to substantially reject its own scrutiny review

The council’s housing and regeneration scrutiny panel undertook a thorough review of the Grainger plc plan, which lasted several months and heard evidence from traders, council officers, Transport for London, Grainger, Quarterbridge, architects, experts and academics. For the Latin Village traders, this was a very positive development, described by MP David Lammy as “a model of good overview and scrutiny work”.

On 21 January, however, the cabinet of Haringey Council rejected eight, partially agreed with three and fully agreed with just three of the 14 recommendations made by its own scrutiny panel on the redevelopment.

That this group, led by Cllr Joseph Ejiofor, is touted as the first so-called “Corbyn Council”, makes this rejection particularly troubling.

The council apparently maintains that some of the recommendations were not within its remit.

However, the rejected recommendations include several key items that seem not to be explained by this assertion.

Firstly, a call to review how all section 106 conditions are monitored and enforced, essentially to ensure the protection of the traders under equalities legislation. An investigation by Haringey Council’s own planning department into section 106 concluded that it indeed was breached and that the council should have known and should have acted earlier. By the council’s own definition, this seems entirely within their remit.

The council also rejected a recommendation to explore the feasibility and cost benefits of all approaches. In so doing, the council are effectively deciding not to give the community plan a chance. The council also rejected the recommendation to work with Grainger plc and relevant community groups to co-ordinate a combined solution. Taken in the round, this begins to look like a wilful attempt to exclude meaningful participation by Latin Village stakeholders in development planning.

Faced with vocal displays of outrage by traders present at the council meeting, Cllr Ejiofor’s unfortunate reaction was captured on camera: he appears to laugh.

In the days following this meeting, bailiffs targeted a number of traders with eviction notices. The eviction attempt eventually halted due to the efforts of those who descended on Latin Village at short notice to show support.

TfL and Haringey council both confirm they knew about the eviction attempt days in advance.

Efforts to secure a meeting with the Mayor of London continue

Efforts to gain the attention of Mayor of London, Sadiq Khan, began anew in 2020.

Following a co-ordinated Twitterstorm in December, aimed at engaging the Mayor and other interested parties, representatives and supporters of the Latin Village put in a strong showing at the Mayor’s Question Time on 23 January.

Six individuals put questions to the Mayor, to loud applause, although only one question was addressed in detail by the Mayor.

Mirca Morera, Executive Director of Save Latin Village, secured the opening question, asking the Mayor for a meeting, something we have pursued, without success, since 2016.

The Mayor’s public response was a clear agreement to meet, later reinforced by Liberal Democrat GLA member Caroline Pidgeon. Unfortunately, we still await a reply to finalise arrangements for a meeting.

Developments in the Covid-19 crisis are likely to result in significant challenges facing the Mayor’s office in the weeks and months ahead.

On 29 January, the fate of Latin Village was discussed in the House of Commons, after David Lammy, MP for Tottenham, secured the opportunity to lead that day’s adjournment debate.

Recounting the history of Latin Village, he spoke evocatively of its unique culture, community and commerce. “Out of the rubble, Tottenham’s South American community has created a treasure trove of culture, community, love and life. London is often hailed as a centre of openness, diversity and multiculturalism; this is a corner of the capital that lives up to the hype.”

In a wide-ranging speech to MPs, he stressed the Latin Village’s relevance to the challenges facing the borough, including crime prevention, wealth creation and promoting social unity. How the fashion for top-down regeneration shapes boroughs across London, and cities across the world, with long-standing migrant residents often losing out.

However, his address focused on the urgent, unresolved concerns of Latin Village traders, for their future within the regeneration scheme, and recent, ongoing mistreatment by the current market management.

He outlined the potential for unaffordable increases in rent that would lead to the likely demise of the Latin Village, citing the condemnations, voiced by the UN, of the proposed scheme. He explained the community plan to preserve and restore the historic Ward’s Corner building.

He condemned the conduct of Quarterbridge and MAM, with particular criticism of MAM Director Jonathan Owen’s appointment as the market facilitator. The clear conflict of interest. The discriminatory and bullying behaviour reported by traders, several examples of which were quoted in the House. The scandal of the recent trader evictions. He called for Quarterbridge, MAM and Jonathan Owen to be removed from their current roles, and for allegations of suspected utilities fraud to be investigated and pursued with the full force of the law.

Finally, in comments addressed to his fellow Labour party members, he discussed the role of Haringey’s Labour-led council. While praising their scrutiny report, he noted that the council subsequently rejected substantial portions of its own review. He challenged this response, including the breach of section 106 conditions, the pledges for rent control miscommunicated during the CPO process, and the council’s unwillingness to explore alternative approaches, including the community plan.

His closing comments urged Haringey Council, TFL and the Government to act before it is too late.

Ensuing dialogue with the then Minister for Housing, Esther McVey, centred on the issue of the CPO. Asked whether it concerned her that evictions, and other measures designed to result in a vacant building, were proceeding despite the ongoing legal challenge against the CPO, McVey replied: “We must await the outcome from the Court of Appeal”. With this, the debate ended.

Despite the straightforward question, it is unclear whether her comment referred to those accused of harassing traders during a period of legal limbo, or simply a discussion of the CPO.

We thank David Lammy MP for a bold and principled intervention on behalf of those who rely on the Latin Village for their livelihoods and connection to their cultural identity.